Gram-negative bacteria are surrounded by a cellular envelope that is comprised of an outer and an inner membrane, separated by a thin peptidoglycan wall. Those membranes exhibit distinct properties that provide a potent physical barrier to antibacterial agents. The discovery of new agents to treat drug-resistant Gram-negative infections generally relies on the agent’s ability to penetrate at least one of the bacterial membranes. One of the challenges we are currently facing is thus to develop reliable methods to measure antibiotics permeation, more specifically across the outer membrane. One of the entryway for antibacterial agents, especially for hydrophilic ones, is through water filed channel forming proteins, located in the outer membrane, called porins. 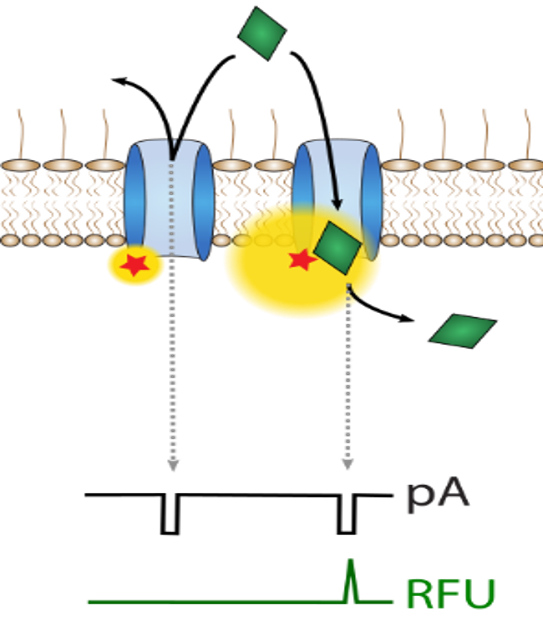 Although binding events of antibiotics in porins are readily detected by electrophysiology, determining if the molecule was translocated through the channel or left on the same side it entered is much more challenging. Here, our aim is to develop an innovative assay for antibiotics translocation across porins using fluorescence as a signaling tool (Figure 1). Recently, monitoring transmembrane channels transport properties by changes in fluorescence has been made possible using genetically encoded fluorescent amino acids. Using a combination of site-directed mutagenesis and co-expression of an orthogonal pair of tRNA and aminoacyl-tRNA synthetase, we are incorporating an environment-sensitive fluorescent amino acid at selected sites in porins’ channels (Figure 2). Those fluorescently-labeled porins will subsequently be used to monitor antibiotic translocation across single porins. By coupling confocal fluorescence microscopy and electrophysiology measurements on a planar lipid bilayer, we will be able to differentiate between antibiotic binding in the channel and actual translocation events, which is currently a limitation of electrophysiological studies based on ion current fluctuations.

Figure 2. SDS-PAGE analysis of a fluorescently-labeled porin after purification by ion exchange chromatography. On the left, Coomassie Blue stained gel of 3 purification fraction, either unboiled (the trimeric assembly of the protein is preserved) or boiled (the protein is denaturated), showing that the tertiary and quaternary structure of the protein is not significantly affected by the incorporation of the fluorescent amino acid. On the right, the same gel observed under UV light prior to Coomassie Blue staining reveal that the purified protein is fluorescent, confirming the incorporation of the fluorescent amino acid.

Gram-negative OMV were first reported in Escherichia coli in the 1960s, when they were observed during electron microscopy studies of the bacterial structure. Secretion of OMV has since been demonstrated in multiple bacterial species and under various environmental conditions. Various properties are attributed to OMV, often relying on their ability to fuse with other bacterial or eukaryotic membranes to deliver cargo (effector proteins, toxins, etc). It has indeed been shown that OMV carry outer membrane and cytoplasmic proteins, with the exact composition varying depending on growth condition, stress applied and genetic background. Abundant outer membranes proteins such as E. coli OmpF, OmpA and OmpC porins are almost always detected in OMVs. Since OMV very often carry porins, we saw in them an opportunity to purify and study porins in a lipid environment similar to the bacterial outer membrane. Moreover, given the propensity of OMV to fuse with lipid membranes, we intend to use then to reconstitute porins into artificial lipid bilayer for electrophysiological measurements to elucidate the effect of outer membrane lipopolysaccharides (LPS) on porins functions.

Figure 3. Schematic depiction of the workflow for electrophysiological study of porins-containing OMVs.